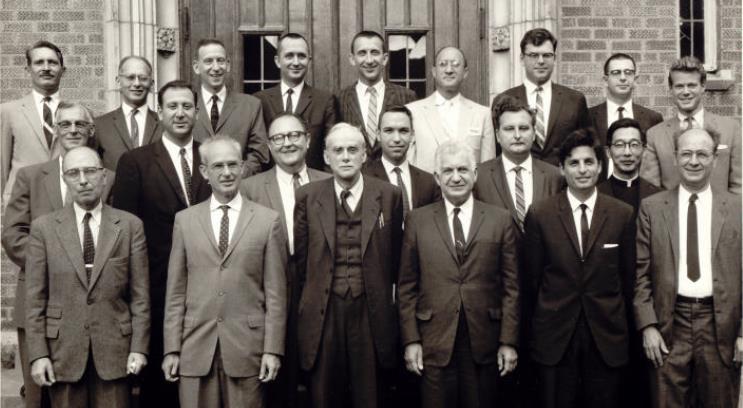 Conference on the Foundations of Quantum Mechanics (1962)

From October 1 to 5, 1962, the physics department of Xavier University hosted a Conference on the Foundations of Quantum Mechanics. The Conference was sponsored jointly by the National Aeronautics and Space Administration, the Office of Naval Research and the Judge Robert S. Marx Foundation and represents one of the most ambitious academic projects ever undertaken by Xavier. The principal participants were 6 eminent physicists, including 2 Nobel Prize winners, who were joined by 16 other specially invited physicists from around the world. Participants came from such prestigious institutions as Cambridge University in the United Kingdom, Princeton, Harvard, MIT, Yale, the Oak Ridge National Laboratory and the Jet Propulsion Laboratory in California. The correspondence pertaining to the Conference contains letters from a number of distinguished physicists including at least 4 Nobel Prize winners.

The idea and inspiration for the Conference was the work of Dr. Boris Podolsky, a Xavier professor of physics at the time. He had been an associate of Albert Einstein at Princeton University and it was Podolsky’s name and reputation that brought such distinguished scientists to Xavier. When Podolsky came to the University of Cincinnati in 1935, Einstein wrote a letter of recommendation for him, a copy of which is in this collection. Podolsky joined the Xavier faculty in 1961.

All the events of the Conference were recorded on magnetic tapes which Dr. Frederick Werner, the Assistant Chairman of the Conference, transcribed and distributed to the participants in mimeographed form. This transcription, corrected and emended by some of the speakers, is now in the archival collection. Unfortunately, only 6 of the original magnetic tapes remain.

In 2002, a commemorative CD disk entitled “Conference on the Foundations of Quantum Mechanics: Commemorating the 40th Anniversary 1962-2002” was produced. It contains the master copy of Werner’s transcription including the “edits” of various participants, though it does not indicate whether all the participants submitted corrections.